This latest edition includes a full revision and expansion, including maps on each of the profiles and additional color charts.

View/Download for printing on your own printer
(duplex, bleed, short-edge binding) 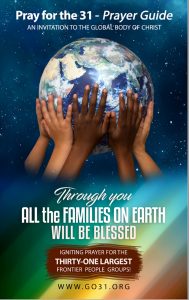 God is up to something BIG!

When God prepares a major advance of His purpose, He often sets His people praying first (so the glory will be clearly His).

Three hundred years ago, as God prepared to stir global mission outreach (following the Reformation two hundred years earlier), His Spirit fell on Moravian refugees in Germany in a “second Pentecost.” This:

Today God is stirring prayer anew for the completion of His unchanging purpose!

Prayer Leaders suggested developing a tool to guide the global body of Christ in praying for these 31 Frontier People Groups.

What is the end goal?

Throughout God’s Word, He declares and demonstrates His intention to bless all the families, households, clans, tribes and peoples of the world (not just individuals).

Yet the hyper-individualism entwined with Western Christianity has often hindered God’s blessing from flowing through whole communities by winning individuals away from their families. In many cultures the resulting division of a family and shame on the extended family is perceived as a sign of God’s curse. God sometimes honor the faith of those who follow Jesus even at the cost of their family relationships by gradually healing the rift in their own families, but in the meantime other families in the same community become determined not to let their families become similarly divided. Thus the approach of winning individual families bears some fruit, but far less than when God’s blessing flows from family to family, healing and strengthening families.

Since the late 1990s, the Holy Spirit has demonstrated anew His eagerness to bless peoples, families and other pre-existing relationships and societal structures through movements of rapidly reproducing churches, toward the good news of God’s kingdom finally being preached in all the world, as a testimony to all peoples (Mt. 24:14).

Over the past two decades, the number of such movements has increased rapidly (from a handful in 1995 to more than 650 such movements today), now with more than 50 million disciples. And most of these movements are doubling in size every two to five years (see the short article Astonishing Progress. Many factors could slow this trend, however the large network of movement leaders represented by the global 24:14 Coalition is working aggressively to continue and accelerate the multiplication of such movements with the aim of movements in every remaining unreached people and place by 2025.

God is stirring something big in our day, and inviting you to participate in “pray-paring” the way for His blessing to finally extend to all of earth’s peoples. He has declared

I will … make you a light for the [nations],
that my salvation may reach to the ends of the earth.

Ask me, and I will make the nations your inheritance ….

Will you join this prayer movement?

The 31 largest Frontier People Groups in this prayer guide, plus another 370 that are over 500,000 in population, carry great influence with many smaller FPGs, making it doubly urgent and strategic to pray for Jesus movements blessing families among these 400 large and influential FPGs.

Prayer is the essential foundation for any movement.

This booklet empowers you to play a vital role in the fulfillment of God’s promise to bless all the families of the earth!

Distinctives of this Prayer Plan/Guide

Note: In this booklet we have chosen to avoid two common labels for movements, for the following reasons:

Save 50% or more over Amazon pricing on this recently expanded prayer guide.

Pray with others for…

Thanks for visiting — Grab a free book on us…